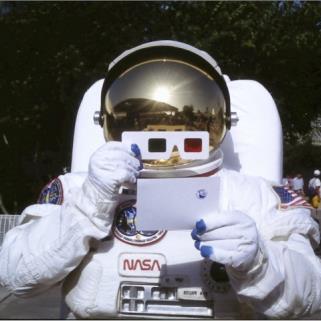 "He was born in Basel, on the border between France, Germany and Switzerland, but his destiny lay further south.

When, aged 5, he moved to Italy, the 3D virus had already hit him.
During his studies he worked as a barman, a cameraman, a director at the least-known TV
station at the time and as a creator of famous exhibits.

He also lived in New York, helping to restore the Statue of Liberty, very dear to him (the liberty, not the statue).

He got his degree (DCVDA-ISA) with a thesis on 3D vision and went to work as assistant director for a RAI film.

After searching for gnomes in Austria, he was sucked back into the advertising world by the international Young&Rubicam agency and for five years invaded Italy with his original commercials, winning an award from the Art Directors Club of New York.

In 1992 (despite his position as creative-group director) he abandoned the orchestra to play as a soloist (or better, a one-man-band).

He devoted himself, body (a lot of it) and soul, to 3D vision.

He has exhibited in dozens of cities around the world.

He has worked with various universities, private industries, research institutes and ministries.

He holds courses on creativity and brainstorming.

He is restoring a thousand stereoscopic plates from World War I and is opening various 3D cinemas as part of the ""3D-Experience"" project tied to tourism.

He is the first Western photographer officially invited to handle the creation of a Russian scientific publication.
He's now working with astronaut Paolo Nespoli

Nor explain to their friends what his job is.
Probably he doesn't know either.